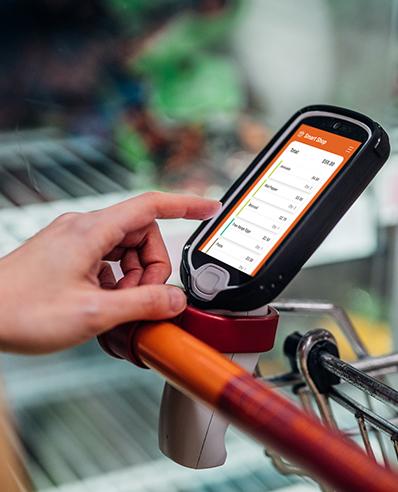 Global economic uncertainty, inflation and supply chain disruptions are major headwinds facing the consumer products and services industry group, and particularly consumer packaged goods (CPG) and retail companies, heading into the new year. Separately, for airlines and hospitality companies, the potential impact of an unexpected crisis on revenue and resistance to cultural changes are the top risks, respectively.

Across many retail and consumer goods categories, the Russia-Ukraine crisis, which has put tremendous pressure on oil prices and shipping costs, and supply chain issues, have pushed inflation to historic highs. At the same time, the industry group, which weathered significant market turmoil during the COVID-19 pandemic, is also contending with talent shortages that have increased labor costs, product availability challenges, difficulty sustaining customer loyalty and retention, and pressure to implement sustainability practices.

These major concerns, cited by CPG and retail industry executives, as well as those identified by airlines and hospitality leaders, are discussed in greater detail below.

Cost and management of people

The labor dynamic in the CPG and retail industry is complicated, with many competing trends. Industry respondents identify labor costs as the second most critical risk for 2023. The respondents said they are concerned about potential increases in labor costs affecting their organizations’ opportunity to meet profitability targets. At the same time, the survey respondents point to succession challenges and the ability to attract and retain top talent as another major threat to meeting operational targets in 2023 — this is the seventh-ranked risk.

Clearly, with rising inflation and the prospect of a recession, many large companies are taking a cautionary approach with hiring. Amazon, for instance, recently announced it will reduce its workforce by as many as 10,000 people, according to some reports, as it prepares for a slower growth period.

While retailers are retrenching as online shopping slows and consumers return to physical stores, some smaller companies that have struggled with hiring in recent years are rolling out perks to attract employees, especially seasonal holiday workers. Rising inflation and the prospect of a recession mean more companies are likely to be cautious with hiring and will need to prepare to do more with fewer workers.

This is a good time for companies to develop a differentiated employee experience and revisit their talent strategy to ensure it aligns with their strategic business objectives. A reactive talent strategy that focuses primarily on filling open positions can no longer suffice. While pay is important, a differentiated employee experience will help with attraction and retention of talent. Being strategic about talent and costs will be critical to avoid losing valuable people to the competition. 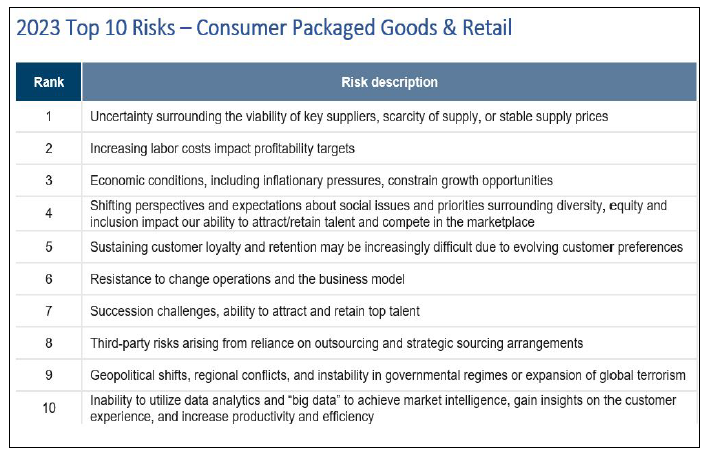 Among the top 10 risks in 2023, CPG and retail executives cited the impact of social issues and priorities surrounding diversity, equity and inclusion (DEI) initiatives on their ability to attract and retain talent; resistance to change in culture; third-party risks; and geopolitical shifts, regional conflicts, and instability in governmental regimes or expansion of global terrorism.

Asked to identify top risk issues they expect over the next decade, CPG and retail respondents cited succession challenges and the ability to attract and retain top talent, the speed of disruptive innovations, sustaining customer loyalty and retention, and supply chain concerns.

Given rising inflation and the prospect of a recession, many large companies are taking a cautionary approach with hiring. This is a good time for companies to ensure their talent strategy aligns with their strategic business objectives. Companies should also consider developing a differentiated employee experience to help with attraction and retention of talent. Being strategic about talent and costs will be critical to avoid losing valuable people to the competition.

Having shaken off the crippling effects of the pandemic, and with global travel and tourism continuing to rebound, the hospitality industry is expecting substantial growth in 2023, led by a strong appetite from vacationers and business travelers to spend even in the face of rising inflation. At the same time, hospitality companies are bracing for a return of more traditional types of risks as well as newer challenges stemming from changes in consumer behavior and expectations.

Whether it’s enhancing digitization and contactless services, improving ESG programs, or creating a collaborative and culture-driven workplace for employees, hospitality companies understand the need to evolve business models to adapt to the changing environment.

In the survey, hospitality executives identify resistance to cultural changes within the organization, challenges associated with attracting and retaining talent, and the threat of catastrophic natural disasters and weather phenomena as their top three risks for 2023. The fourth-ranked risk also concerns culture, specifically the fear that their organization’s culture may not sufficiently encourage the “timely identification and escalation of risk issues and market opportunities.”

Like the rest of the service industry, hospitality companies are playing catch-up after two years of turmoil and not being able to invest in talent and technology. The move to digital, for instance, requires continued investments in training and hiring people with new skillsets that are difficult to find in the current labor market. Many employees who were laid off or furloughed have not returned, resulting in the need to train inexperienced workers to fill roles. The second-ranked risk for hospitality organizations underscores this concern about not having the right people to achieve operational targets or satisfy desired succession planning.

If they haven’t already, hospitality companies should consider automation to solve some of the challenges associated with the tight labor markets. Also, they need to reassure existing employees that they will be the recipients of more meaningful work and not pink slips while incorporating the technology in a manner that optimizes the supply chain.

Increasing commitment to ESG initiatives is another priority for hospitality companies. Whether addressing natural catastrophes by retrofitting buildings or reducing carbon footprints by limiting water usage and encouraging renewable energy, many major hospitality companies have committed to sustainability targets. For instance, according to the UK-based Sustainability Hospitality Alliance, which consists of large and small hotel companies worldwide, its members have collectively committed to reduce carbon emissions by 66% per room by 2030 and by 90% per room by 2050.

More than ever, consumers care deeply about how companies stand on social, sustainability and regulatory matters, which means that leading hospitality brands need to reexamine their purpose and value and make decisions that resonate with target consumers. ESG initiatives should be viewed as future-proofing the organization; not merely a task of reporting the status quo or checking a box, but a mission to change outcomes.

While 2022 demand has already eclipsed pre-pandemic levels, several lingering effects remain and continue to threaten the ability of airlines to meet operational targets. Among the biggest threats are labor issues and disruptions impacting the reliability of airline flight schedules.

At the height of the pandemic, airlines offered early retirement packages to pilots. With air travel now at record levels, airlines are experiencing a highly competitive environment as they seek to replace the pilots who took early retirement, anticipate the departure of pilots approaching mandatory retirement age, and work to fill roles at regional operators to replace pilots who have departed for larger airlines. Other significant challenges impacting the airline workforce include travel benefits for employees that are less attractive due to limited seat availability, resulting in fewer open seats for non-revenue travel. That, combined with a tight labor environment and heavy competition for IT, finance, accounting and other back-office positions, has created significant concerns about talent acquisition. It is no surprise that airline executives identify challenges associated with the overall work environment and shifting labor model as their third-ranked risk for 2023.

Companies’ ability to manage an unexpected crisis impacting their operations or reputation is ranked first. In general, airlines are most concerned about any event that could result in an extended ground stoppage, as revenue is not recoverable. Accordingly, airlines likely view a ransomware event impacting flight operations as more impactful than a breach of personally identifiable information. While both result in significant reputational damage, the inability to generate revenue is top-of-mind for airline executives and boards. Survey respondents from the airline industry also highlighted catastrophic natural disasters and weather events as top concerns. While they deal with weather events daily, airlines are getting better about integrating forecasting technology and predictive models to minimize the concentration of aircraft in catastrophe-affected areas that threaten to take aircraft out of service.

Several major airlines have also committed to the goal of achieving net-zero emissions by 2050. In both the United States and Europe, regulators are proposing rules that will require airlines to provide greater transparency on greenhouse gas emissions, including certifying carbon removal. Some in the industry are receptive to the idea but want to see a more “deliberate, incremental approach” to implementing the new rules. Also, several big airlines are investing in emerging technologies that could replace higher-emission aircraft.

Overall, more than half of the top 10 risks identified by airline respondents is related to people and culture — risks they fear could impact their operations and ability to deliver quality services and products to customers. Cost of fuel and other services, such as cabin cleaning and food vendors, have increased significantly. Higher fares indicate airlines are looking to pass this cost on to customers, but whether the strategy will be successful in the longer term is another issue that respondents identify as a top risk they may need to contend with in 2023.

About the Executive Perspectives on Top Risks Survey

We surveyed 1,304 board members and executives across a number of industries and from around the globe, asking them to assess the impact of 38 unique risks on their organization over the next 12 months and over the next decade. Our survey was conducted online in September and October 2022 to capture perspectives on the minds of executives as they peered into 2023 and 10 years out.

Respondents rated the impact of each risk on their organization using a 10-point scale, where 1 reflects “No Impact at All” and 10 reflects “Extensive Impact.” For each of the 38 risks, we computed the average score reported by all respondents and rank-ordered the risks from highest to lowest impact. We also grouped risks based on their average into one of three classifications: 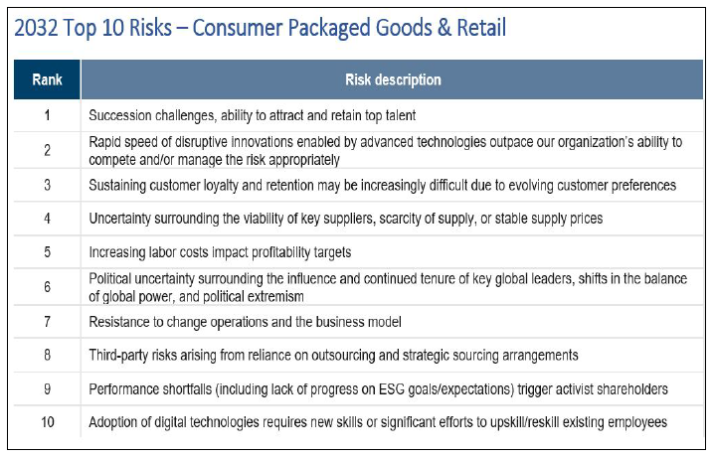 Carol is Protiviti's Global Consumer Products and Services Industry Lead. She is responsible for setting Protiviti’s strategy to provide industry specific solutions to our clients as they transform their business. Strategic areas of focus include e commerce, omnichannel ...

Key issues being discussed around the globe in the boardroom and C-suite The level of uncertainty in today’s global marketplace and the velocity of change continue to produce a multitude of potential risks that can disrupt an organization’s business model and strategy on very short notice. Unfolding events in Eastern Europe, changes in government leadership in...
Read more